With the launch of my latest kit design, I thought I would write about it and some of the background. If you have been following my blogs, I volunteered to write this without any prompting from the team.

Early last year, a hen party approached me to do a small workshop on Whitework.  This workshop was my first time doing a craft workshop for a group of ladies at a hen party. They wanted a small craft session and had asked me to design a suitable Whitework design for the Bride to be and then show everybody how to do the needlework. This was a fun task, coming up with a suitable design with the guidelines being – the Bride to be loved ‘folksy’ designs and to keep in line with a wedding.

So, the design that came together for that workshop was my “Floral Heart” design. I did not think that when I designed it for the hen party group it would have proved as popular as it has this year. With lockdown and not being able to hold workshops, I developed kits which enabled everyone to try out new crafts at home. The Floral Heart continues to be one of the most popular needlework kits. 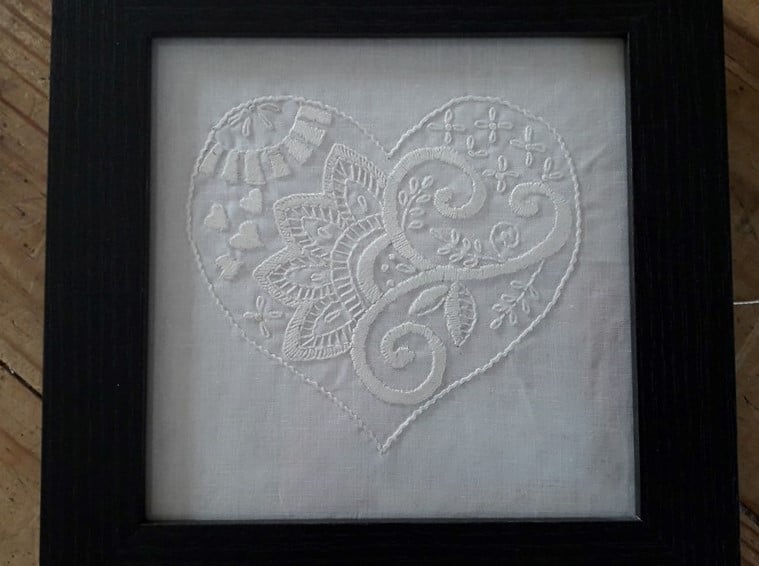 Whitework was one of the crafts that I was teaching and it is such an elegant embroidery. It is funny how there are different names for the different types of needlework and yet they use the same stitches at times. Redwork uses the same stitches (at times) and yet it is different from Whitework.

The Origin of Whitework

Whitework embroidery originated in India and China, then became popular in the West during the 15th century. It refers to any embroidery technique in which the stitching is the same colour as the foundation fabric. Whitework was traditionally worked with white thread on white fabric and used for church linens, underwear, bridal and christening wear. It is also the forerunner to the fabric Broderie Anglaise which is a whitework needlework technique consisting of embroidery, cutwork and needle lace. I am sure many of us remember wearing dresses or shirts made from Broderie Anglaise.

Various techniques were employed to make the stitches stand out against the white background. The type of thread that is used to help give it the look, is a Perle cotton or Coton a border. This thread tends to be thicker than 6-stranded embroidery cotton and has a matt finish which sets off the white embroidery against the white fabric.

With teaching the Whitework to groups, I designed a few simple designs which proved to be a great success. With lockdown this year and not being able to conduct workshops, I decided to release kits and the two whitework designs that I had taught previously, proved to be very popular as kits. It is great to see how popular this needlework is and it got me thinking of how elegant Whitework would be with a Christmas theme. It was also due to the fact that I had been asked during the year to teach a Christmas whitework class during November. I think we were all hoping that lockdown would be over and workshops could resume as before. Unfortunately, that workshop was cancelled due to restrictions being in place. However, I was able to teach it to another group which was great to be able to do. The class stitched one of the designs and thoroughly enjoyed learning the techniques.

After that workshop, I came home and decided that the design would be lovely in a free-standing frame and have two different designs. Which is what I did, I wrote the pattern and decided on the stitches to be used and stitched the two designs up in the white cotton and added a bit of sparkle in the design by using silver thread to stitch the stars. It certainly adds that bit of elegance into a simple needlework design and I will be displaying it with pride over the Christmas period.

So, in time for Christmas, I am releasing the kits to make these two whitework designs. They would make great presents to give to someone, or even for yourself so you can make the designs to display in your home over Christmas. The kits contain everything you need to stitch the two designs. I also have them available in pattern form. The anchor Coton a Broder and metallic silver thread is also available online, along with the freestanding duo black picture frame to complete your two whitework designs.

If you enjoy needlework and hand stitch, I know you will enjoy stitching these two whitework Christmas Lights.